A few days ago I was gifted an old stereo amplifier. It doesn’t turn on anymore and the friend who gave it to me has no intrest in repairing it, so I took it home to have a look inside. I didn’t know the brand or anything about the quality of this amp. But it was free and is already broken - why not have a look inside and see if I can fix it?

I’m by no means an expert in analog electronics but I decided to give it a try. From what I have seen, these devices don’t seem that complicated as there are nearly no ICs or digital components. It’s just a good old amplifier circuit.

As you might expect, I didn’t get much information about the device. From what I can read on the outside it is a “Philsonic AK-635 stereo amplifier”, so I did some reseach on the particular model.

From what I was able to find out, Philsonic was a brand name used by International Korea Electronics (INKEL). It is the company that today still manufmanufactures Sheerwood electronics, which happenes to be the brand of the main stereo amp I use, a Sheerwood RX-772 that has been very nice.

The Philsonic AK-635 was for sale around 1978 under various names:

From what I read it seems to be a quite decent amp with 45W power rating per channel and a distorsion of lees than 0.08% providing a “typical 70’s sound”, whatever that means.

What I can tell for sure, is that it weighs a lot and seems to be build like a solid chunk of metal. The knobs and levers feel very nice and the whole thing seems very well constructed, like something that was expensive at the time it was sold.

Searching for a schematic, I descended into the depths of google to and found one that is at least marked as the same model. 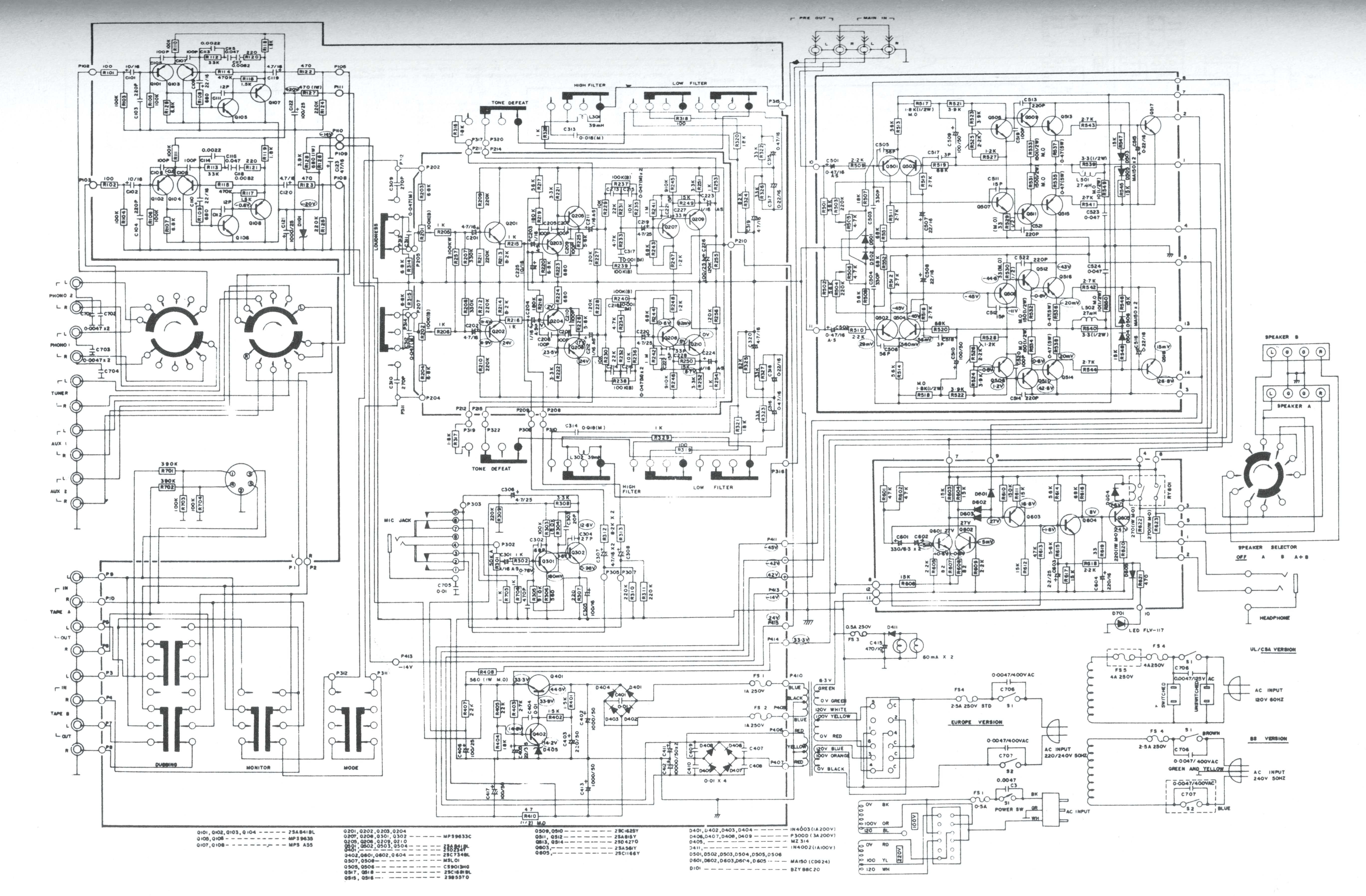 The labeling of the components doesn’t match the silk-screen on the pcbs of my model, but the layout seems at least similar from what I can tell at first look. It might prove useful.

Well, actually the second test. The first one was just plugging it in and switching it on. Nothing happened, not even the LED cam on. No output. No nothing.

Before any further investigation, I looked for burned fuses. The amplifier has 3 fuses accessible from the outside for the two speaker channels and mains and two more inside.

The fuses are just a small glass tube with a thin wire running through it that melts before anything else can take too much damage. At least in theory, since this sadly was not my experience at all.

All fuses accessible from the outside were fine, but I was happy to see that one of the PCB-mounted fuses was blown. Happy because at this point I thought this might be the only problem and just replacing it might give me a funcional amplifier. Oh boy, was I wrong! 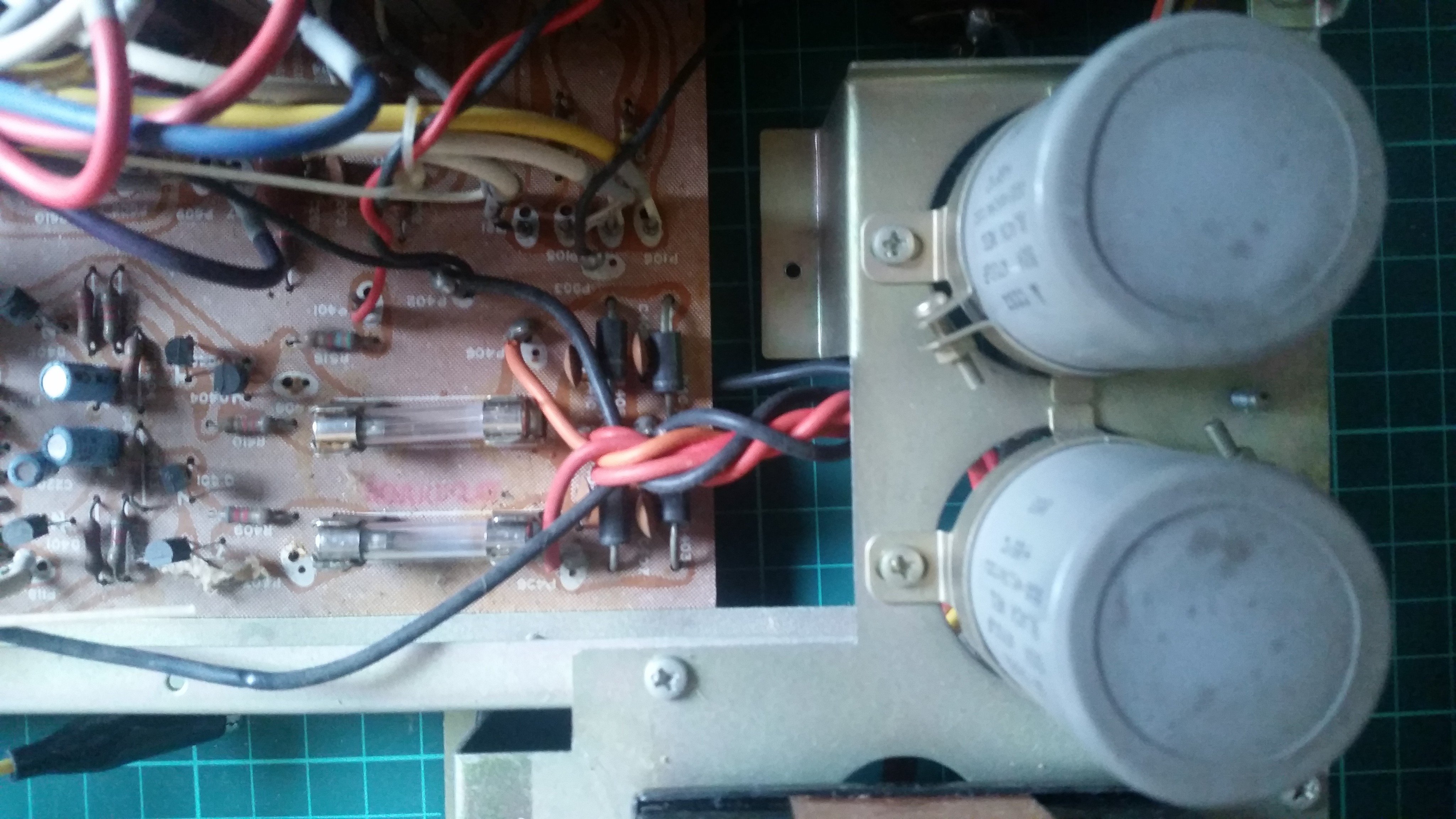 After removing the glue form the fuse holder on the PCB (disgusting stuff that had turned brown and was sticking all over the place) I replaced the burned fuse. Sometimes it pays to keep all those broken electronic devices around, a random PCB from the “trash” pile had an intact glass fuse with the same rating on it.

I’ll leave you for this first part with a video of what happened after replacing the fuse and powering the amp on. As you may guess from the footage below, there will have to be a continuation of this blog series.